We all know that Python came on board first in 1991. Hence you might ask, how come a 2 decades old programming language is still so much important for so many technologies? Or, is it even that important to learn about Python? Or it is just overhyped?

So let’s talk about Python’s plus points first. Python is a scripting language with a modular architecture, simple syntax, and rich text processing feature. Hence, it is most commonly used in AI, Information Security, and many more. Large organizations like CERN, NASA, Google, Wikipedia, Instagram, Spotify are using Python for a long time. So, if you aspire to work with them someday and you don’t know Python, you are pretty doomed!

Also, just learning all about Python won’t serve the entire purpose. You need to be a little more tactical than that. And how will you do that? Pretty simple! By going through the most commonly asked Python interview questions. Here are the top 20 questions we selected for you to prepare for your next interview. Let’s see what they are!

Python is a high-level, interpreted, general-purpose programming language that can be used to build almost every type of application with the right tools/libraries. Python supports objects, modules, threads, exception-handling, and automatic memory management that help in displaying real-world problems and designing applications to solve them.

2. What are the benefits of using Python?

The benefits of using Python are:

3. What is a dynamically typed language?

A language is called dynamically-typed if the type of a variable is being checked during run-time.  Apart from Python, JavaScript, Objective-C, PHP, Python, Ruby, Lisp, and Tcl as well are dynamically-typed languages.

In Dynamically typed languages, variables are bound to objects during run-time by means of assignment statements. Also,  you can bind the same variables to objects of different types during the execution of the program while working on dynamically-typed languages.

4. What is an interpreted language

An Interpreted language executes its statements line by line. Programs written this language runs directly from the source code, which means no intermediary compilation step is required for this one. Python, Javascript, R, PHP, and Ruby are prime examples of Interpreted languages.

The full form of PEP is a Python Enhancement Proposal. PEP is an official design document that provides information to the Python community and describes a new feature for Python or its processes. PEP 8 documents the style guidelines for Python Code. While contributing to the Python open-source community, you’ll need to follow these style guidelines sincerely and strictly.

6. How is memory managed in Python?

Python Memory Manager handles memory management in Python. The memory is allocated by the manager in the form of private heap space for Python. All Python objects stored in this heap are private. Hence, it is inaccessible to the programmer until the time Python provides some core API functions to work upon the private heap space.

7. What are Python Namespaces?

A namespace is a feature of Python that makes sure that the object names in a program are unique and can be used without any conflict. Namespaces as dictionaries are also called 'name as a key' mapped to a corresponding 'object as value'. This allows for multiple namespaces to use the same name and map it to a separate object.

8. How many Python Namespaces are there?

There are 3 types of Python Namespaces:

9. Why are Python Namespaces used?

Local Namespace is temporarily created for a function call and gets cleared at the time when the function returns.

Global Namespace is created for important packages in the script and lasts till the time execution of the script isn’t complete.

A scope is a block of code to determine the relevancy of Python objects. Python Namespaces identify all the objects inside a program in a unique way. Although, Python namespaces also have a defined scope where their objects can be used without any prefix. A few examples of scope created during code execution in Python are as follows:

11. What is Scope resolution in Python?

L (Local)— Names assigned in any way within a function (or lambda), and not declared global in that function.

G (Global) — Names assigned at the top-level of a module file, or by executing a global statement in a def within the file.

12. What are Decorators in Python?

A decorator is a design pattern used in Python to allow the users in terms of adding new functionality to an existing object without modifying its structure. Usually, Decorators should be called before you define a function you want to decorate.

13. What are the lists and tuples?

Lists and Tuples are sequence data types of Python that can store a collection of objects. The objects stored in both these sequences can have different data types.

14. What are the differences between lists and tuples? 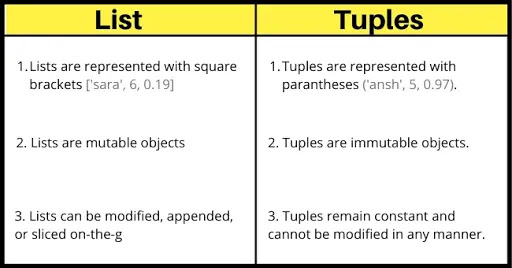 Just like decorators, Python comprehensions, too, are syntactic sugar constructs that help in building, altering, and filtering all the lists, dictionaries, or sets from a given list, dictionary or set. While using comprehensions, the user saves a lot of time, and those types of codes that might contain more lines of code.

16. What are the common built-in data types in Python?

There are several built-in data types in Python. Some of them are as follows:

18. What are the shallow copy and deep copy?

Shallow Copy is a bit-wise copy of an object that contains an exact copy of the values in the original object. If either of the values is a reference to other objects, the reference address for the same as well will be copied.

Deep Copy copies all values on a loop from source to target object. It is also capable of duplicating the objects referenced by the source object.

19. What are the modules and packages in Python?

Modules are Python files that have a .py extension and capable of having a set of functions, classes, or variables defined and implemented. They can be imported and initialized when the user uses the import statements.

20. What are the advantages of modular programming in Python?

We think this should be enough for your next interview. Still, if you have any queries, you can reach out to us through the comment section below. Stay tuned till we come up with some more interview questions for you!