If someone asks you, “What can be the pillar of an organization’s digital transformation?” the answer will most definitely be DevOps. Yes, it is that obvious. The idea of DevOps first came on board from the discussion of Patrik Debois and Andrew Clay Shafer on the Agile infrastructure concept in 2008’s DevOpsDay’s event. Since that’s time, DevOps has become the apple of each and every organization’s eye.

But why is that?

Because DevOps is a culture. Not just a set of frameworks.

Although, there is one loophole that might cause a problem while you are trying to implement DevOps in your organization. Since it’s an entire cultural shift, the changes are going to be pretty drastic and you’ll need to cop up with that. But even after the barriers, DevOps is spreading its roots pretty fast.  A survey of Puppet shows the increment of DevOps implementation throughout the year as follows: 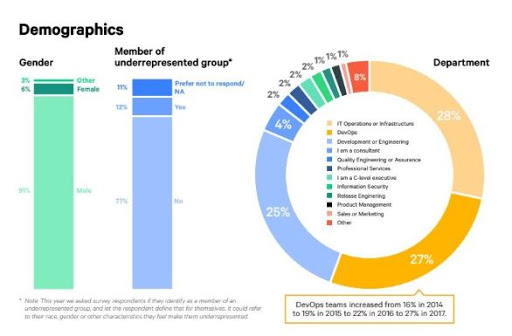 So you might be wondering, what possible DevOps mistakes can one make in terms of implementation when the growth is this much?

We spoke to various DevOps Leaders regarding this topic and jotted down 6 most common DevOps pitfalls for engineering leaders to avoid which might answer your question!

Of course, not everyone is being able to rock DevOps like Netflix or Wallmart. But you need to think that they also have been in your shoes at the starting phase, faced problems, and solved it like a pro! So, if they can do it, why can’t you?

These DevOps pitfalls are difficult to spot out, but once you find them, it’s not that complex to minus them out. Let’s see what they are.

1. DevOps can be broken into how many groups?

Probably the most common mistake you can make while creating a DevOps team is, making one single team and hand over all the DevOps tasks to them. Let us tell you, the Development and Operations team feel that it is a pain to interact with everyone in the brand new team. The soul idea of DevOps lies within the collaboration of teams. So if you are making a new team just to make it happen, you are only making things more complicated.

Concentrate on culture by cultivating a mentality of automation, quality, and strength. For instance, you may include everybody in a discussion about your design, or about regular issues found underway situations in which every pertinent player should know about how their work influences others. DevOps isn't just about a solitary committed group, however about associations that advance all together with the group.

2. Focusing on too many tools:

There are so many DevOps tools in the market now. Isn’t it? And all of them are rolling the dices pretty well. A Statista report shows the usage of tools and frameworks for DevOps  in 2020: 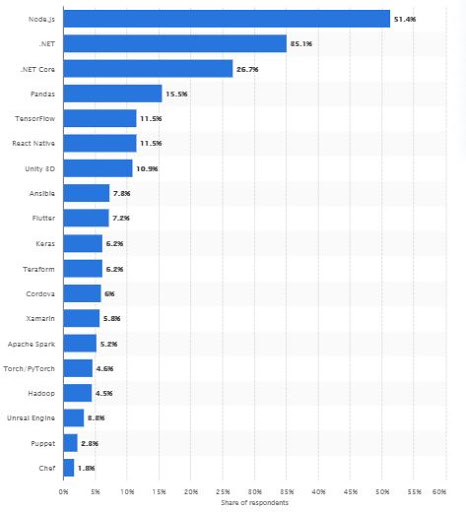 Now, it’s natural for you to get confused or focus on n number of tools altogether. Try not to begin your DevOps system by contending about and choosing a lot of various tools. You will find out soon how hard it is to locate the correct tools for the group and hierarchical procedures on the grounds that each team (developers, IT operations, security, etc.) will need to utilize a particular tool for their DevOps practices, regardless of whether it makes it harder to work together with different teams. Additionally, new tools are developing constantly—even one will help incorporate different instruments.

Obviously, you have to have the best tool for Agile software development, continuous integration, deployment, version control, etc. Not having the correct tools can keep groups from seeing the most extreme profit by their DevOps endeavors. Be that as it may, essentially purchasing a tool just for continuous integration devices or deploying application container isn't gonna give your organization a swift transition to DevOps.

You will probably hear a few merchants guarantee to have the ideal tool for your DevOps practices, yet adopt a skeptic strategy and remember that there's no single tool that can cover all that you need. If you need help in this regard, try going through our article 8 best DevOps tools in 2020 to bridge the two worlds.

3. Focusing on speed rather than safety and quality:

Numerous organizations receive a CI/CD methodology as a piece of their DevOps activities since they have to diminish the amount of time it takes them to create and convey a new application code. In any case, DevOps professionals state that speeding up to the detriment of security and quality is a serious mix-up. Regardless of whether you assemble, test, and send new applications a lot quicker underway, consider the possibility that those applications don't work as proposed.

To keep security and quality high, development teams should lead to testing as right off the bat in the development procedure as could be expected under the circumstances. And more significantly, demonstrate that the discharge up-and-comer is prepared for persistent conveyance before sending.

4. Allowing too many branches:

In their 2017 State of DevOps report, Puppet stated:  “We found that having branches or forks with very short lifetimes (less than a day) before merged into trunk, and less than three active branches in total, are important aspects of continuous delivery, and all contribute to higher performance. So does merging code into trunk or master on a daily basis.”

In Agile Software Development and DevOps practices, programming (trunk) ought to consistently be deployable so developers can look into the trunk not highlight branches at any rate day by day. On the off chance that the assemble breaks, it tends to be fixed in a short time and another designer can be on-loaded up in one day, with a creation like condition on their engineer workstation.

It very well may be hard to bring an end to developers out of the propensity for utilizing branches on the off chance that they are acquainted with a conventional waterfall environment, however, restricting branches can be exceptionally gainful. In the event that you favor trunk-based turn of events, have designers work consistently in a for the most part reasonable, single rendition of your codebase.

5. Not paying enough attention to security:

In one of their survey, CA technology found out that security concerns were the main obstruction to DevOps, referred to by 38% of respondents. In a similar vein, the Puppet review found that high-performing DevOps groups invest half less energy remediating security issues than low performers. Clearly, these high-performing groups have discovered approaches to impart their security goals and to incorporate security right on time with periods of their development process.

The DevOps specialist ought to comprehend the procedures, assess the controls, and recognize the dangers. At long last, security is consistently a piece of DevOps rehearses like DevSecOps. For instance, in the event that you have any security issues underway, you can address them inside your DevOps pipeline through the apparatuses that the security group as of now employments. DevOps and security practices must be carefully followed. There ought to be no trade-offs.

If you are not sure about where your security practices can go wrong, you can go through “How to get rid of the blame game of security responsibility?” and “DevOps Vs DevSecOps: Is it a fading difference?” to know how you can solve it.

6. Not preparing for culture change

This goes without saying, once you are preparing to go DevOps, you need to fix the mindset of your entire organization about a cultural change. Which, many people miss out.

Hence, ask yourself 1st, are your Dev and Ops team ready for the drastic change?

If they are, then start explaining it to them by drawing a roadmap on how your organization will proceed with DevOps.

Just to give you an idea, here’s how your map should look like! 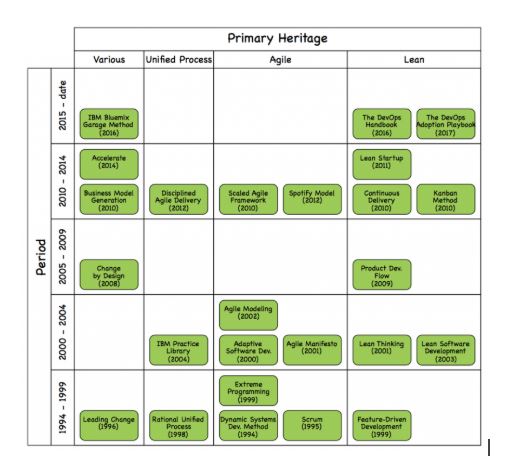 Once you are done, then get started!

As we have been saying since long, DevOps is the new face of the digital revolution. Avoid these pitfalls, and you will be able to be a part of this DevOps wave that will overflow you with business growth.

Want to go through all the DevOps norms in detail?

Join for our DevOps Sessions to do the same!